Turn off the TV, tune in to the sound of Springboard 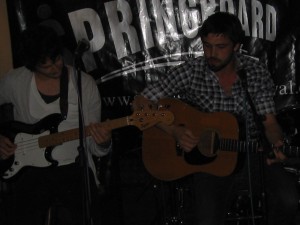 With the BBC showing the musical wilderness that is the Eurovision Song Contest and ITV seemingly trying to take over the world with the freak show that is Britain’s Got Talent the Springboard Festival provided a desperately-needed escape route.

It’s one of those lesser music events that struggles for mainstream media space against the big extravaganzas and even – it would appear round here – against bog-standard village fetes and parties in urban parks, but Springboard is growing up in its own quiet(ish) way.

From cautious beginnings at a couple of pubs in the village of Cottingham, a few miles outside Hull, Springboard now boasts eight stages in six pubs and a roster of about 170 live performances over four days and three nights.

Add the impromptu buskers and wandering minstrels and you end up with a musical feast and pubs packed with people who thankfully prefer the real thing to the mass-produced drivel on their TV screens.

If there’s a criticism it’s that the event is now becoming a tad too big for venues which don’t have the ideal stage and viewing area and for the organisational expertise of the people running the show. But that doesn’t mean Springboard needs to get bigger every year – it just needs to find its level.

That level varies depending on things like the time of day, the style of music on offer, the sun, the rain and the amount of alcohol consumed.

For families it’s perhaps unfortunate that the curfew is creeping forward a little every year. Kids used to congregate in comfort as late as seven, eight or even nine of an evening. This year they were being pushed out by increasingly wobbly grown-ups by about 6pm.

That probably had as much to do with the combination of fine weather and the prospect of a Bank Holiday lie-in. Less easy to justify was the foul-mouthed repertoire of one performer in a family pub just before 5pm on a Sunday.

But it would be unfair to dwell on the negatives. We’ll go again next year and if Springboard don’t learn from their mistakes then we will. We’ll arrive earlier in the afternoon and leave earlier in the evening, but we’ll still be confident of having plenty of fun given the great variety of styles on offer.

Our seven-year-old drew the line at the comedy antics of some bloke belting out “When Johnny Comes Marching Home” to the accompaniment of a gloved fist smashing into a beer tray.

“If that man went on Britain’s Got Talent he’d get three crosses,” she commented.

Still at the quirky end of the spectrum, but more positively received, was Mark Robinson punching out his bouncy 70-s style World Cup anthem on a low-slung shoulder synthesiser.

Testtone3 from York delivered a style of glam-rock, the guitarist playing with his teeth and the whole set giving a nod of acknowledgment to Spinal Tap. Danny Landau is a singer-songwriter who deserves bigger audiences, Georgia Seddon has a unique, chirpy singing style over some very deliberate piano-playing and shared the stage with Marie Sioux, a rising singer-songwriter star from California, on their way to a gig at the legendary Hull Adelphi Club.

If you’re into live music check them all out via the usual search engines. Have a look also for Adrian Byron Burns, visiting from France and a Springboard regular of international renown. And the loud, growling sound of the James Dean Syndrome and the punky reggae ska rap rock combinations of Counting Coins, my personal highlight.

And in the middle of it all was a heavy metal band whose output made me think of something extremely heavy being dropped from a great height and very aggressively on Britain’s Got Talent. If only…